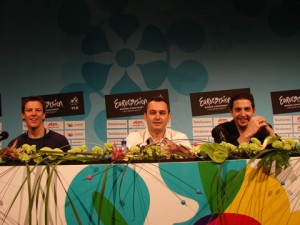 As Barry Viniker, Benny Royston led esctoday.com for four years. In that time, he strengthened the website’s position as the largest and most popular independent Eurovision Song Contest news website.

In 2010, Benny Royston and his esctoday.com team led the charge to ensure esctoday.com became the first website run by fans for fans to interview all participating Eurovision Song Contest artists for the year:

For the first time, a fan website has interviewed all participating acts at the Eurovision Song Contest during rehearsals and provided video footage of every competing country. We’ve also provided our most in-depth information about every artist and covered more official parties than ever before. 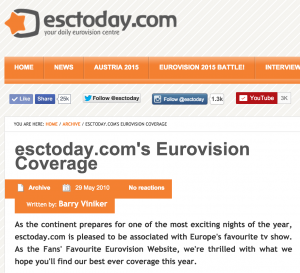 Benny Royston says the best thing about his time at esctoday.com was the team that he inherited and grew:

We were so much more than a team, we were a family. We worked together to achieve things no-one thought possible. We chased every story, pushed for every interview and it was done with passion for the Eurovision Song Contest and the aim of allowing every Eurovision fan to feel that they were at the Contest, to see everything that goes on and hear all the news as if they were a part of it. Looking at eurovision.tv today and the explosion of fan sites and Eurovision blogs, I’d say we achieved something really special. Those relationships still stand today and many people that were a part of the team remain some of my closest friends.